Joblo.com has started a new YOUTUBE series called “Gone But Not Forgotten!” In the first episode of this new series on the site, they take a look back at Superboy: The TV Series.

This is the description of the new series along with the Episode #1 summary from JoBlo.com:

“Welcome to Gone But Not Forgotten, where we take a look at old TV shows that left a mark on our childhood’s, but tend to get lost in the shuffle of nostalgia. For our first episode we take a look at Superboy, which ran for four seasons, airing from 1988 – 1992 on CBS. Starring Gerard Christopher as the “Boy of Steel” (who replaced the first season lead, John Haymes Newton), the show also featured Stacy Haiduk as Lana Lang, Sherman Howard as Lex Luthor and a healthy dose of guest stars, including IIan Michael Thomas, George Lazenby, Gilbert Gottfried, Ilan Mitchell-Smith and even a young Joaquin Phoenix!”

Join Writer/Editor David Arroyo and Awfully Good Movies Jesse Shade as they take you back to the skies of Superboy!

SUBSCRIBE for more of all the LATEST JoBlo Videos here: https://goo.gl/R9U81J 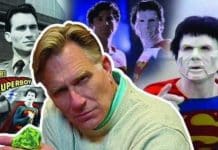 Bizarro…The Thing Of Steel is Headed for Superman Celebration 2022!